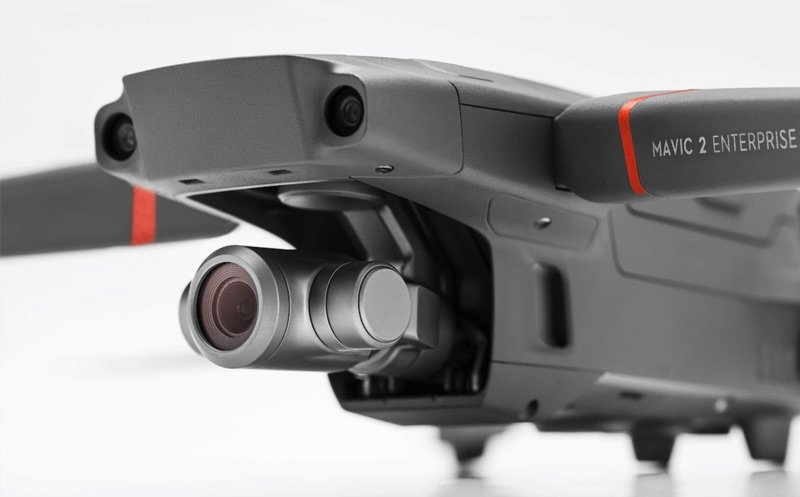 The DJI Mavic 2 Enterprise is a foldable, portable, long-range flying camera and accessory system that adapts well to uses by first responders and businesses that routinely inspect hard-to-reach assets.

This affordable quadcopter has a 2x optical and 3x digital camera, allowing a broader view or a close-up look at developing situations or infrastructure. The camera shoots sharp 12 MP stills and vibration-free 4K ultra-high-definition video. It transmits live video over its full 4.97-mile range in 1080p high definition. It stays aloft for up to half an hour.

The DJI Mavic 2 Enterprise UAV performs many tasks demanded by first responders, including law enforcement personnel, firefighters and search-and-rescue operations, and by security teams. And it’s affordable, so it doesn’t strain your budget. Capable of flying in darkness and shooting nighttime imagery, the Mavic 2 Enterprise costs far less than an infrared camera-equipped quadcopter.

Firefighters can use Mavic 2 Enterprise to assess conditions in natural and urban settings. If power is cut off and people at the other end of a blocked road need to evacuate, attach the included loudspeaker and deliver the evacuation order—and directions to the safest way out—using the Mavic 2 Enterprise. You can also use the speaker to deliver instructions to a hiker who’s been found or a victim of a boating accident.

Need to mark your position for others on your team or support personnel? The included beacon attachment flashes a white light that is visible for 3 miles. It makes itself known through darkness, fog and smoke. Tether it to an optional power system to significantly prolong the visual alert.

If you need to record videos or stills at night—at a crash scene or in the aftermath of a crime, or to follow a suspect—mount the floodlight and you’ll have enough light to illuminate what and who you need to observe and to record evidence on 4K video or in 12MP still photos.

A Mavic Lens that Zooms

The Mavic 2 Enterprise camera has an optical zoom lens with two focal lengths—24 and 48mm in 35mm equivalent. Zoom capabilities mean personnel get a closer look without taking on added risk.

The Mavic 2 Enterprise camera has 2x optical magnification. Give the command through the DJI Go 4 flight program, and the focal length of the lens changes instantly. Bring objects visually closer—ideal for police surveillance, fire observation or industrial inspections. The camera also has a 3x digital zoom with minimal loss of sharpness.

Each Intelligent Flight Battery can power the DJI Mavic 2 Enterprise for up to a half-hour maximum flight time. Using the included accessories slightly reduces flight time.

The batteries self-heat from about 43 degrees Fahrenheit down to 14 F. Heating also can be switched manually with the remote controller. The batteries protect themselves from harmful power levels when stored.

Mavic 2 batteries are interchangeable with those of the Mavic 2 Zoom and Mavic 2 Pro. The included Mavic 2 charger and available charging hub will charge the batteries of any Mavic 2 model. A full charge takes about an hour. A hub will charge up to four batteries in sequence, starting with the battery that has the highest reserve, then automatically moving on to the next highest.

Security of both the aircraft and data is paramount with the Mavic 2 Enterprise. If you’re recording evidence, you can’t afford to have it made inadmissible because an unauthorized person accessed and tampered with it. If you’re conducting inspections for your business or an industrial client, you can’t risk having that data stolen.

Both the aircraft and data recorded on the 4GB internal memory are password protected. Set the password manually, and change it periodically or when you change personnel. Without the password, no one can start or fly your Mavic 2 Enterprise, and no one can access the internal data you’ve collected.

Both public safety personnel and industrial inspectors can take advantage of time stamping to clearly identify when and where data was recorded. GPS time stamping is activated in the Camera Settings menu. It stamps video and still images with the time they were recorded and with the GPS coordinates. That augments imagery presented as evidence, and it enables inspectors too quickly identify an asset, such as a cell tower or bridge abutment, for review. It also allows a return to the precise spot for a further look.

Mavic 2 Enterprise, like its Mavic 2 siblings, has Hyperlapse capabilities, a feature that enriches presentation videos. The drone’s camera shoots quality aerial photos and automatically edits them together into a time lapse with a twist: The drone can move while shooting and not just hover. Pre-programmed modes help.

The Free setting lets you control the drone manually. Circle lets you draw a circle around your subject and follow that course after determining the interval of shots and the duration of the shoot. With Course Lock, select a point on the map, fly to it automatically and make adjustments you may want along the way. Using Waypoint, designate multiple points on the map, and the Mavic 2 Enterprise flies to each, making a time lapse of each and of the whole flight.

Never guess as to having enough battery reserve to complete the task. OcuSync 2.0 warns you as you set the program if you won’t have enough power to take the shots and complete the Hyperlapse flight.

DJI software upgrades improve the quality of imagery on the Mavic 2 Enterprise.

DJI’s high-performance gimbals cancel out drone movement, mechanical vibrations and wind effects, and the gimbal on the Mavic 2 Enterprise is no exception. Go into difficult situations with confidence that the 3-axis mechanical gimbal will provide stable, shake-free video, even though conditions make smooth flight difficult.

Performing inspections in a crosswind? Recording a wildfire being fed by gusts? Conducting surveillance on a car that’s making sudden moves? The Mavic 2 Enterprise gimbal will account for the drone’s unwanted movements, resulting in clear, shake-free imagery.

The Mavic 2 Enterprise has sensors on every surface for advanced obstacle avoidance: front, back, top, bottom, and both sides. It thoroughly avoids obstacles while flying forward or backward by using the sensors and the included Advanced Pilot Assistance Systems. Right and left sensing operate only in Tripod mode. Still, the obstacle avoidance on the Mavic 2 Enterprise performs at a level you might expect only on much more expensive drones. And for low-light situations, including indoor flight when GPS is not in use, bright built-in lights assist downward sensors. The lights are visible during flight, even in daytime. The included Mavic 2 Enterprise accessory floodlight also can be used indoors or outside at night for powerful illumination that aids navigation.

The live video transmission of the Mavic 2 Enterprise is beamed at 1080p from as far as 5 miles, which is full range, using OcuSync 2.0. It delivers strong signals, avoiding interference with automatic switching between 2.4 and 5.8 GHz frequencies.

Mavic 2 provides the pilot with navigation and photography/videography aids to make flying and operating the drone easier.

First, there’s satellite positioning with GPS so that you can send your drone back to a precise spot to resume a shoot, surveillance or an inspection. The Task Library allows you to save a shoot so that you can repeat it almost exactly—the route flown, the altitude, the drone movements and the photos/videos recorded.

The Advanced Pilot Assistance System augments obstacle avoidance when flying forward and backward. Once a hindrance is sensed, the Mavic 2 flies over or around an object in its path without stopping.

ActiveTrack 2.0 allows the drone to lock on and follow subjects, now including fast-moving subjects, such as cars. It has trajectory assistance to help determine where the subject is heading and follow it when it becomes temporarily blocked from view by vegetation or terrain. Point of Interest, Tripod, Waypoint 2.0, Asteroid, Helix, Dronie and Boomerang enable the Mavic 2 Pro to perform preprogrammed flights and aerobatics while filming points designated onscreen by the pilot. These effects can help to dress up presentation and instructional videos.

Downloadable to both iOS and Android devices, DJI Pilot uses the remote controller using DJI Go 4 to allow pilots to build more detail into flight plans and generate semi-automatic inspection procedures. DJI Pilot can share live video from the Mavic 2 Enterprise to DJI FlightHub, a multi-drone fleet management software. It also can use Local Data Mode to protect data and can display warning signals from nearby aircraft through AirSense.

Do More Across a Range of Applications

An industry-first, the Mavic 2 Enterprise comes with a built-in extended port that allows users to mount DJI modular accessories onto the drone. These modular accessories are intended to provide enhanced accessibility, particularly for public safety agencies, empowering users with a tool that is both flexible and highly capable.

DJI has refined its drone technology to improve safety and security before takeoff and during flight, providing an enhanced user experience. In addition, these features have been introduced to address the concerns related to data security and safety, particularly for sensitive government and enterprise users.

The imaging system has been developed with two goals in mind: assisting pilots in close-range missions, and ensuring captured data is more relevant and trusted than ever. Improved FlightAutonomy gives you omnidirectional obstacle sensing, an advanced sensing system comprised of 8 high resolution vision and 2 infrared sensors placed on the sides of the aircraft. These powerful set of sensors work together to determine the relative speed and distance between the aircraft and an object, so you can fly and hover with more stability than ever in a wide range of open and complex environments.

Self-heating batteries – Everywhere You Go. The Power Is Always with You.

Slim enough to carry anywhere and engineered to handle any task – whenever duty calls.

In-Built Controls at Your Command.

To improve user experience during flight, DJI has made significant improvements to its existing technologies, and has also introduced new functions that help operators better carry out missions as needed throughout various types of missions. 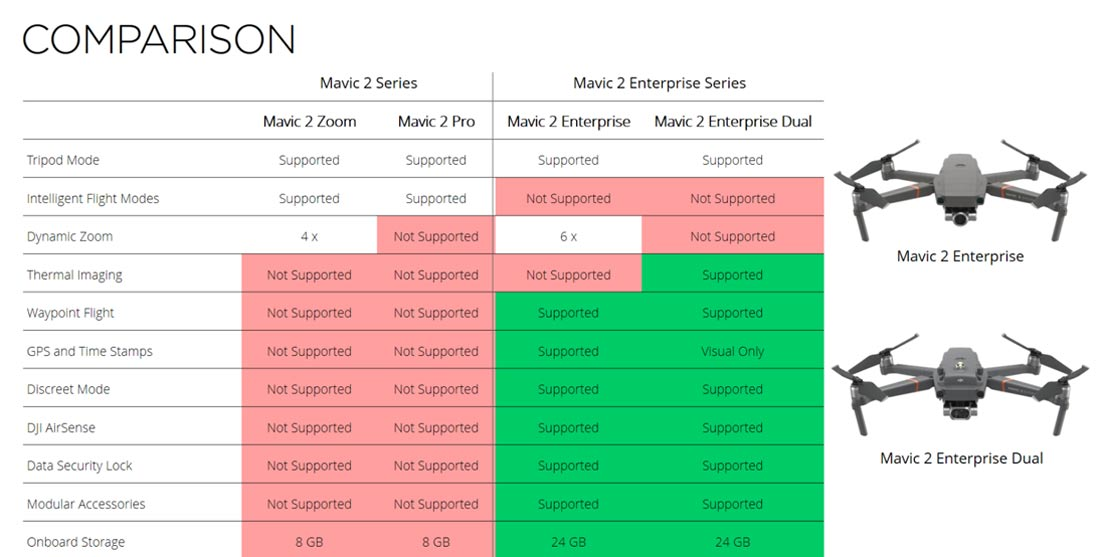 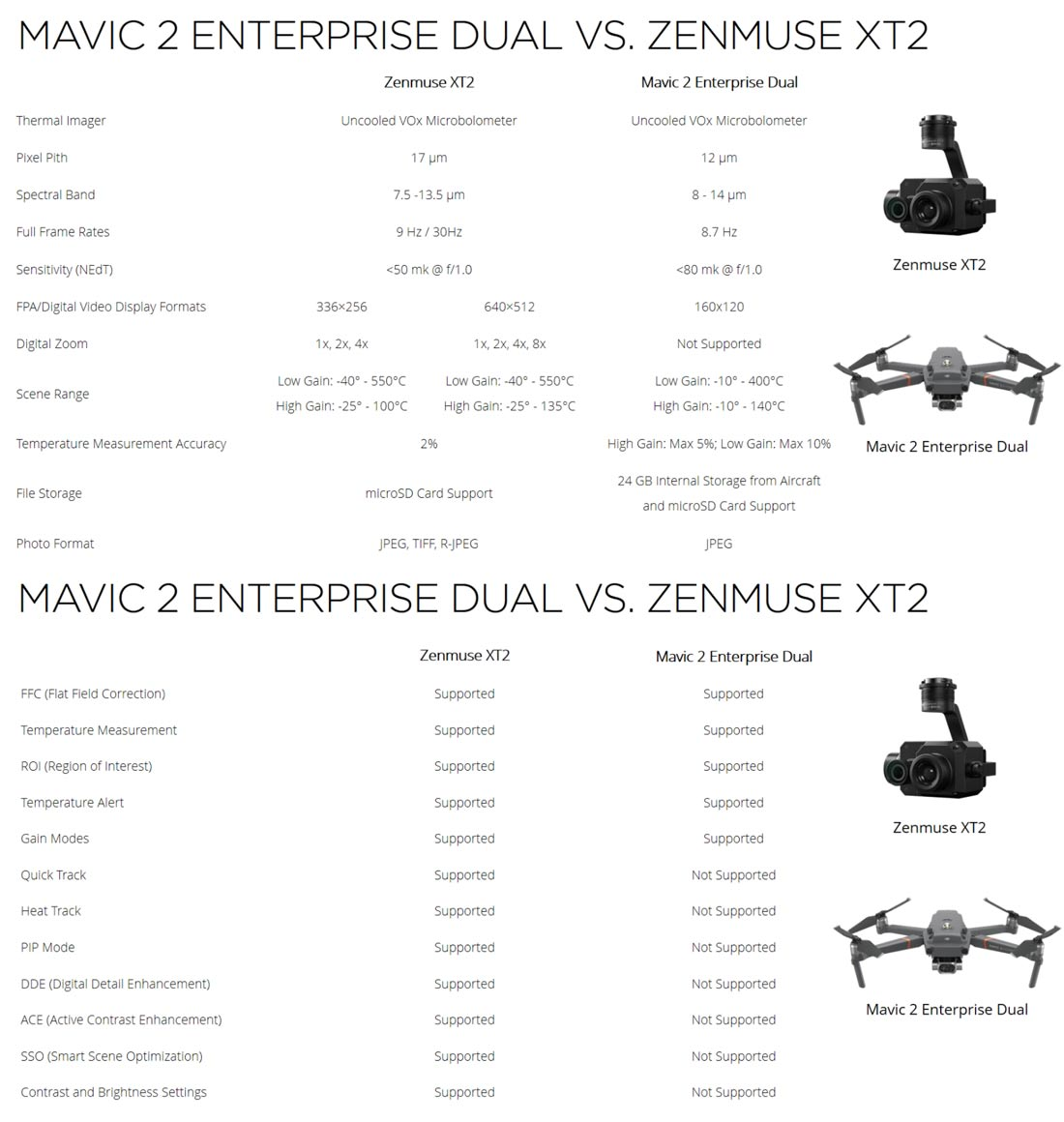 What’s in the box?

ABOUT US
34 North Drones is a drone services company born from the merger of several extraordinary pilots, UAV developers, designers and production consultants encompassing years of practical unmanned experience and thousands of unmanned and manned flight hours. 34N also has an additional scalable workforce that allows us to add expert, experienced pilots in major utilities, inspection, LiDAR, Ag and SAR as needed for large projects or expanded operations.
FOLLOW US
Copyright © 2019 34 North Drones, LLC. All rights reserved.